In a resent OpenFOAM version (see https://www.openfoam.com/releases/openfoam-v1706/numerics.php) a new interphase advection scheme was released. It is a geometric volume of fluid method. Geometric volume of fluid method means that a geometric model for the interphase position and orientation within a cell is established and advected within a time step. One can imagine that the interphase between two fluids within a cell is described as a plane which has a given position of the plane center and orientation of the normal vector. Two different method to reconstruct this plane are currently available within interIsoFoam: isoAlpha and plicRDF. isoAlpha calculates the surface dividing the two fluids based on the α iso-value which cuts the cell according to the volume occupied by the two fluids. For details see [6,7]. plicRDF uses a piece wise linear radial distance function to compute the orientation and position of the interphase within a cell. The gradient of the distance function gives the normal of the interphase. By moving the interphase position within the cell the volume fraction of the two fluids divided by the interface can be adjusted to the α value. For details see [6]. This reconstruction method was released with OF2006 (see https://www.openfoam.com/releases/openfoam-v2006/solver-and-physics.php).

In a resent paper [2] performed an extensive comparison and validation of the two reconstruction methods of interIsoFoam. They compared interIsoFoam with interFoam and another volume of fluid code (Basilisk). The main findings of the paper were that: (i) plicRDF causes the smallest parasitic currents in a static bubble, (ii) regarding a rising 2D bubble plicRDF delivers slightly better results than MULES with a bit smaller computational times and (iii) plicRDF was the only OpenFOAM version capable to predict the spiraling movement on a coarse grid of a 3D rising bubble. Note that the test cases of the paper can be downloaded here: https://wiki.openfoam.com/Collection_by_authors\#Lionel_Gamet.

Inspired by the novelty of the plicRDF interface reconstruction method and the promising results of [2], the purpose of this tutorial is to analyze the solver interIsoFoam with the plicRDF reconstruction method a bit more in detail. For this purpose the experiment described in [1] is taken as reference. [1] measured the shape of a axial symmetric air bubble exiting a circular orifice. The orifice was submerged by a liquid. This kind of test case is often used as preliminary test case for solvers which are meant to be used later to simulate boiling (see [3,4]).

In this first tutorial of a series we will analyze the influence of the boundary conditions and domain size on the flow and detachment time of a rising bubble. The next tutorials will have a look at the influence of the grid size, time step size, number of inner and outer iterations, settings of the parameter influencing the interphase advection scheme and finally also the way the curvature of the interphase is computed.

Setup of the experiment

In the next figure the experimental setup used in [1] is sketched. The experimental facility comprises a horizontal surface from which the bubble growth takes place. This surface is submerged in a 20 mm water column within a square 50 mm glass tank. The growth orifice has a diameter of 1.6 mm, is manufactured from stainless steel and is inserted into the submerged surface. With a high speed camera [1] measured the evolution and detachment of the gas bubble released from the orifice. The measured detachment time was 0.684 s. This is our main quantity of interest against we compare our simulations.

Having analyzed the experimental setup, we see that we have clear defined physical boundaries: Air enters the domain by a circular pipe. From the description of the experiment it is known that the velocity profile was parabolic like in a fully developed laminar pipe flow. The water was placed in a quadratic glass tank: From this we known that the setup was confined by walls. The height of the liquid column is also known. From the description of the experiment we also know that the rising bubble was rotational symmetric. Unfortunately the tank wall are not rotational symmetric (they are quadratic actually). For this reason the problem is not completely rotational symmetric.

Knowing the physical boundaries of the experiment we want to reproduce, we have to decided the boundary of our numerical simulation. Being this a tutorial, we want to keep the computational afford small. For this reason, we want to exploit the rotational symmetric bubble shape and decide to use a rotational symmetric grid. With this approach we can perform a 2D simulation which reduces the computational time considerably.

Furthermore we decide that the height of the domain should be equal to the liquid column since at the upper boundary the boundary condition is known. The last decision which has to be taken is the lateral extent of the computational domain. If we decide to cut the computational domain before the lateral wall, we need to carefully choose the type of boundary condition which mimics best the real condition at this artificial boundary. 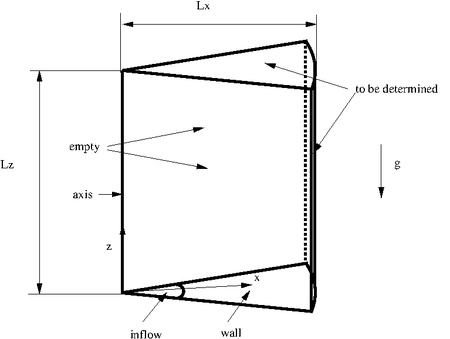 The next listing shows the blockMeshDict. The main parts are taken from here: https://openfoamwiki.net/index.php/Main_ContribExamples/AxiSymmetric. Note that the line mergeType points should be added in the file. Otherwise zero area faces are created at the axis which cause errors in the checkMesh utility. The extension of the domain in z and x-direction can be specified by the entries Lx and Lz. The position of the points delimiting the domain boundary are calculated via the eval functionality of OpenFOAM. The number of points in x- and z-direction a specified by the variables nx and nz. The points are distributed with equal spacing.

The computational setup was inspired by the setup used by [1,4] which simulated the same case as examined in this tutorial.

Regarding the outlet a zero gradient boundary condition was used for α and a pressureInletOutletVelocity for the velocity (see https://www.openfoam.com/documentation/guides/latest/doc/guide-bcs-outlet-pressure-inlet-outlet.html). This boundary conditions set the velocity to zero gradient if the flow is pointing outside the domain and computes it according to the flux φ if it is pointing inside the domain. Additionally also a inletOutlet boundary condition is analyzed as outflow condition for the velocity. The inlet value of the velocity is set to a zero vector (0 0 0). For the pressure prgh three types of boundary conditions are testes: prghPressure, prghTotalPressure and fixedValue. The prghPressure condition provides a static pressure condition for prgh. It means that the static pressure is specified and prgh is calculated accordingly. For details see https://www.openfoam.com/documentation/guides/latest/api/classFoam_1_1prghPressureFvPatchScalarField.html\#details. The prghTotalPressure conditions is similar to the prghPressure. Also here one specifies the static pressure a the patch. The prgh value for this condition is however reduced by the dynamic pressure 0.5 ρ u2 compared to the prghPressure condition. For details see https://www.openfoam.com/documentation/guides/latest/api/classFoam_1_1prghTotalPressureFvPatchScalarField.html\#details

In this section the results obtained by changing the pressure boundary condition at the top and the boundary condtions at the outer axial boundary are shown. This study was performed since finding the correct conditions was not trivial (at least for me).

In order to provide an overview of the simulations performed, the next table shows the combination of boundary conditions used at the top boundary and at the outer axial boundary. The denomination of the cases is also displayed.

In the next figure snapshots of the α values are shown for different time steps. For this simulations a no-slip wall at the outer radial boundary was used. The left column shows the results obtained by applying a prghPressure boundary condition at the top and the right column shows the results when applying a fixed value at the top for prgh. Note that for a prghTotalPressure similar results to a prghPressure boundary condition is obtained. It is evident that the air bubble exists the pipe located at the bottom surface and slowly stretches with time. When the surface tension is not strong enough to hold the bubble it brakes and moves towards the exit. This qualitative picture is the same for all boundary condition applied at the top. The main difference between the simulations where different boundary conditions for prgh at the top are applied, is the latest stage of the simulation: for a fixedValue the bubble does not leave the domain (see bottom most pictures) and for a prghPressure the bubble leaves the domain. Thanks to Henning Scheufler who suggested to change the type of boundary condition in order to allow the bubble to leave the domain (see https://develop.openfoam.com/Development/openfoam/-/issues/2016). 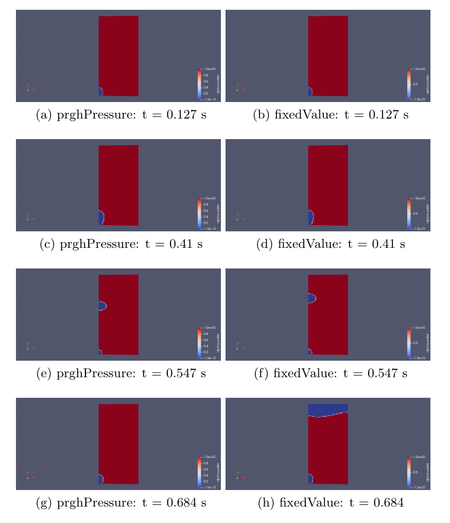 In the next figure the temporal evolution of the center of gravity in z-direction of the air is shown. It is evident that for the tree cases with a no slip side boundary where the bubble leaves the domain (labeled as case B, case C and case F), the center of gravity in z-direction suddenly decreases when the bubble is advected through the outlet. For case A where a fixedValue is used for prgh at the outlet, the center of gravity in z-direction of the air phase remains constant when the air bubble reaches the top of the domain. Regarding the detachment time of the air bubble similar values are obtained for this four cases. The time when the bubble detaches from the bottom surface is clearly visible by the steep gradient of the center of gravity of the air phase. For the two cases where we varied the pressure condition at the side boundary (case D and case E), using a total pressure condition leads to a similar solution with the cases where a no slip wall was used. For a fixedValue condition for prgh at the side wall we can observe an increased detachment frequency after the air bubble detaches the first time from the bottom surface. The predicted detachment time is too small for all simulations. The best agreement with the experiments could be achieved when an inletOutlet boundary condition is applied to the velocity at the outlet where the latest detachment is obtained. We will see in the next tutorials if we can improve the results and if possible analyze the reason of the discrepancies between simulation and experiment. A first cautions guess of the reason of the discrepancies between simulation and experiment is that the curvature computation using the gradient of the volume fraction α is only zero-order accurate (see [7]). For this reason it is the preponderating error in the simulations where the surface tension place a crucial role effecting the flow behavior and the curvature is computed by the gradient of the volume fraction. 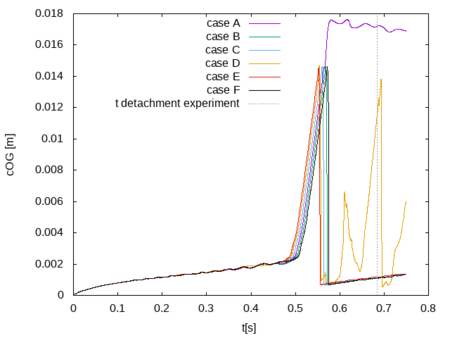 Regarding the simulation with a totalPressure condition at the outer axial boundary is evident that no obvious trend of the detachment time on the domain size can be observed. The detachment time is similar for all configurations simulated. This indicate that the size of the smallest domain is sufficient to have a solution which is fairly independent of the domain size.