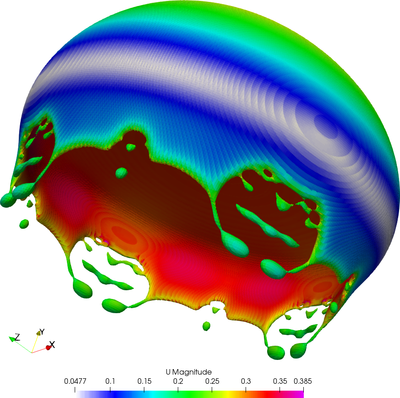 The Allrun_sensitivity script is at the highest level, above Allrun. It is used to run a grid sensitivity for all solvers, interFoam, interIsoFoam, and also the enhanced version of isoAdvector by H. Scheuer [3], now partially integrated in the v2006 with the plicRDF reconstruction scheme. Allrun_sensitivity should be run first to create running directories for the different VoF solvers. It will generate 6 running directories (3 solvers x 2 levels of grid refinement, as discussed in the former paragraph). The grids are the same for all solvers. Users might thus want to only generate the grid for one of the solvers (e.g. interFoam), and then create links in the others.

The Allrun.pre script should be run first to create the mesh. The background grid is first constructed by running blockMesh, then snappyHexMesh is used to refine near the domain centerline. renumberMesh is used to reduce the matrix bandwith. It is a good practice to always run renumberMesh. Then the setAlphaField utility is run to initialize the bubble as a sphere.

The Allrun script should then be run to call the VoF solver. These computations are very long and might benefit from AMR in future releases of the test cases. Results are provided for reference in the Wiki. Post-processing quantities of interest (bubble volume, area, centroid, velocity and sphericity) are extracted from the solver log file through a grep command.

The bubble trajectory is a 3D spiral, drawing almost a perfect circle in the x-y plane for the fine grid case, as can be seen from figure 1 taken from the article in press by Gamet et al. [4], with the standard isoAdvector solver interIsoFoam. A sample wake visualization, using the &labda;2 vortex criterion, is shown on figure 2 for the level 4 coarse grid. 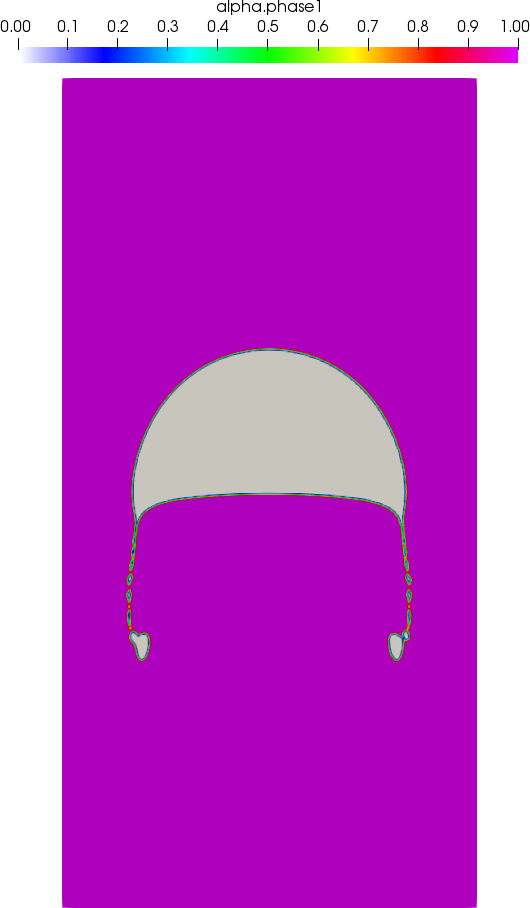