The Simulation setup is inspired by the experiments of [3]. The experiments consisted in a flat plate which rotates about the stroke axis with an angle of 0 <= Φ <= 90° and pitches about the rotational axis with an angle of β = +- 50°. The details of the kinematics are described in [3]. The wing span was R = 107mm and the thickness was s = 3.4mm (see [4] since in [3] the thickness of the plate was not described). The distance from the rotational axis to the wing root was ΔR = 71.5mm (private communications). In order to perform a two--dimensional simulation, the rotatory motion of the point located at mid-span is projected on a horizontal plane. That means that the displacement of the point located at the center of the wing in the experiment is the same as the horizontal displacement of the wing in the simulation. The pitching motion is the same in the experiment and in the simulation.

Since the interpolation errors in overset grids is proportional to the cell size difference between moving and background mesh (of course also to the cell size itself), the purpose of the mesh generation was to minimize this errors. In order to achieve this goal, the size of the cells of the background mesh and the moving grid have to be similar in the region where the interpolation is performed. For this reason the moving mesh was generated with snappyHexMesh in combination with different refinement regions. Since snappyHexMesh can perform only three--dimensional refinements (a hexahedron is split in eight cells with no option for the user to impose only splitting in two directions) the utility extrudeMesh is used. With this utility the 2D mesh at the symmetry plane can be extruded having a mesh with only one cell in span wise direction. The mesh is shown in the figure below.

As for the other tutorials presented, the different zones (background mesh and the moving meshes) should be differentiated by the scalar field zoneID. This field should have a different number (starting with zero) for each mesh (see figure below). The overset method implemented in OpenFOAM detects itself the different cell types. The cells adjacent to the patch denominated as overset are chosen as interpolated. For this cells the matrix coefficients are not derived from the finite volume discretization but using one of overset interpolation method chosen by the user. The cells which are inside the wing are flagged as hole cells and exclude from the calculation. The other cells are treated as calculated (the matrix coefficients are derived from a finite volume discretization). The cell types are visualized on the right of the figure below.

The kinematics of the wing are imposed by choosing the adequat motion solver. Since the wing executes a sinusoidal movement in x-direction and pitches at the and of the half stroke with a linear change of the angle β (see figure below on wing kinematics where the evolution of the x-position of and the angle β during the first cycle is shown), the tabulated6DoFMotion function is chosen. This function allows to impose the temporal evolution of the displacement in x-,y- and z-direction and also the rotation about the same axis. The displacements and rotation are relative to the initial position. The rotation is described about the point denoted as CofG. Since the rotation in the experiment was about an axis located a forth of the chord length from the leading edge, CofG was set to at this position in the initial state. The dynamic mesh dictionary is shown below. 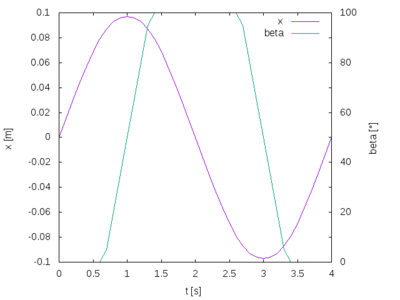 Furthermore phase averaged PIV measurements of the normalized vorticity ω = ω* c/U* where shown in the reference experiment. c represents the chord length. In order to compare this quantity with the experiments, a small coded function object is included in the controlDict which does the phase averaging at phase times of t = 0.2, 0.64, 1.24, 1.6 and 1.8 s. This times correspond to the non--dimensional times of t/T = 0.05, 0.16, 0.31, 0.4 and 0.45 of the reference experiments of [3].

According to [3] the cycle of a flapping wing can be divided into five stages: the emergence of the leading edge vortex (LEV), the growth of the LEV, the lift--off of the LEV, the breakdown and decay of the LEV. For each of this stages the phase averaged scaled vorticity ω (left column of the figure below) and the pressure scaled by the mean flapping velocity squared and the density (right column of the figure below) is shown. The interpretation of the results and its comparison with the reference experiment is left to the interested reader. 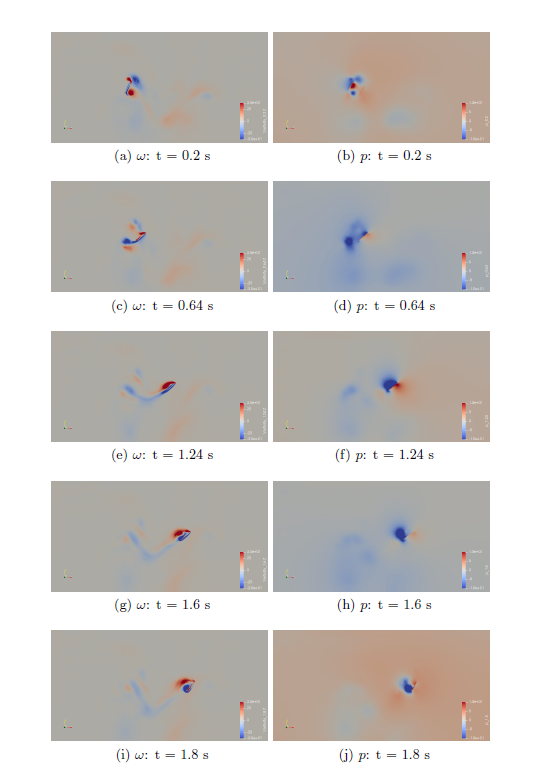