Fluid structure interaction is associated with a multitude of physical phenomena: the stability and response of aircraft wings, the flow through arteries, the vibration of heat exchanger, the vibration of compressor and turbine blades and many more [1]. In order to capture this phenomena accurately, it is important to sorrowfully validate both fluid and structure solvers first separately and after that both together. In this spirit, in this small tutorial we show a small validation case of the six degree of freedom solver of OpenFOAM. This solver is responsible to advance the location of a rigid body subject to fluid forces and restrains like springs and damper in time.

The next figure shows the setup of the simulation: We have a closed square with a fluid initially at rest. Actually the fluid part does not play a role in this tutorial since we are interested only in the movement of the one degree of freedom spring-mass-damper system. In order to exclude any influence of the fluid force on the movement of the circular cylinder we set the density ρ and the viscosity ν to zero (actually to a very small value to avoid possible divisions by zero). In this way the pressure force which acts normal to the solid body surface and the shear stress which acts parallel to it do not influence the motion of the cylinder. 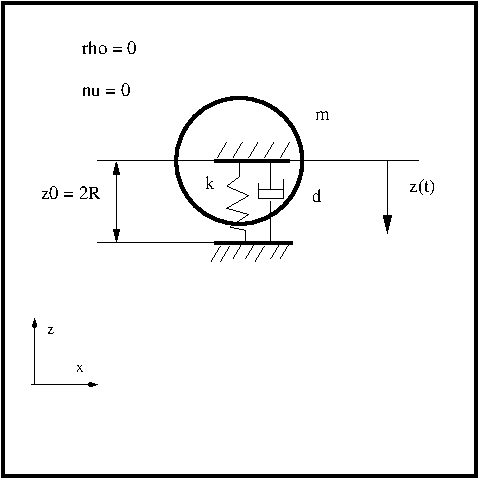 The mass m is set to m = 0.03575 kg, the spring constant k of the linear spring is set to k = 69.48 N/m. Two different damping cases are considered. The first one is an undamped system. In the second case the damping constant d is set to d = 0.0039 Ns/m which corresponds to a weakly damped system. For undamped and weakly damped systems the oscillation induced by the fluid on the structure can have potentially disastrous effects. The spring has an initial extension of z0 = 0.0016 m which corresponds to the diameter of the cylinder.

For this configuration we have an analytical solution which we can use to verify our solver:

In this tutorial we will compare the results of two solvers: overPimpleDyMFoam and pimpleFoam. The first solver uses the overset method to account for the displacement of the solid body and the second one the morphing mesh method. The reason we chose to compare this two solvers even if we are only interested in the solid body motion solver a twofold: The first one is for consistency. Since in the previous tutorial (see [2]) we compared this two solvers and in a follow up tutorial we will do the same, it is consistent to do the same here. This tutorials belong to a series which aim to verify the capability of OpenFOAM to simulate vortex induced vibrations on circular cylinders. The second reason is that the solver overPimpleDyMFoam does not allow to update the spring and damper force during the outer iteration of the pimple loop. We will see that this leads to an unstable numerical method for the undamped spring-mass system if the Newmark method is used. The meshes generation is taken from the tutorial [3] and are shown in the below figures:

Since we are not interested in the fluid solution the amount of cells are kept very low: 1267 for the overset mesh and 868 for the morphing mesh.

The following two listings shows the settings of the dynamicMeshDict. In this dictionary the parameters for the sixDoFRigidBodyMotion solvers are set. The only difference between the morphing mesh and the overset mesh is in the entry dynamicFvMesh. We set two constrains for the rigid body motion: One is that the cylinder can displace only along the z-axis and we also blocked the rotation around the y-axes. In order that the fluid force has no influence on the body motion we set the density rhoInf to 1.0e-15. The viscosity in the dictionary constant/transportProperties is set to the same value. The spring has an initial extension of 0.0016 m which corresponds to the diameter of the cylinder.

Entry for the overset mesh:

Entry for the morphing mesh:

In the following we will explain the most important parameters in the dynamicMeshDict.

The entry accelerationDamping is a factor which is multiplied with the acceleration used to calculate the new velocity and the new position in the motion solvers. As example code we will show the function solve in the symplectic solver (the factor aDamp() is also found in the Newmark solver). The file can be found in $FOAM_SRC/sixDoFRigidBodyMotion/sixDoFSolvers/symplectic/symplectic.C

The entry patches provides a list of boundary patches for which the fluid forces are integrated.

The entry mass provides the mass of the solid body.

The entry centreOfMass describes the position of the center of mass of the body.

The entry momentOfInertia describes the principal components of the inertia tensor (see e.g. [4]). That means that at the beginning of the simulation the Cartesian coordinate system must align with the principal axis of the inertia tensor. (see also [5]). For simple bodies the page [6] provides a list of moments of inertia. In our case we have a solid cylinder with the mass m, the radius r and the height h. The inertia moment around the axis of the cylinder (in our case the y-axis) is calculated as follows:

Around the other two axis (the x- and z-axis) it is calculated as follows:

Note however that in this tutorial the value of the moment of inertia does not play a role since the rotational degree of freedom is blocked.

The next figure shows the results obtained by the overset mesh. Two different time step sizes of dt = 0.0005 s and dt = 0.001 s are compared with each other. Furthermore two different method to integrate the ordinary differential equation are investigate: the implicit Newmark method and the explicit symplectic method. It has to be mentioned that the Newmark method for the overset method is also explicit since the spring and damper force are not updated during the outer iterations of the simple loop. It is obvious that the Newmark method is unstable for both undamped and weakly damped system. The error decreases with decreasing time step. The symplectic method reproduces the analytical result exactly.