In this tutorial we will look at the simulation of the dynamic stall of a periodically pitching NACA0012 airfoil in an incompressbile flow. We will compare 2D RANS simulations with the experiments by [2]. The periodically pitching motion is achieved by an arbitrary mesh interphase (AMI). The same periodically pitching motion can be achieved also using the morphing mesh approach or using the overset mesh method. Unfortunately a few test with the morphing mesh lead to a deterioration of the mesh due to the large deformation of the mesh for the present case. Regarding the overset mesh such problem do not occur since the mesh topology is not changed. A few test however, lead to a much higher computational time compared to the AMI strategy. For this reason the AMI is chosen. The same method shown in this tutorial, could be also applied to the pitching motion of the wings of a wind turbines or a helicopters. Dynamic stall is a phenomena occurring in many technical application like vertical axis turbines (see [4]), airfoils under the influence of gusts, ma- neuvering aircraft and also horizontal axis wind turbines (see [3]). Dynamic stall on a periodically pitching airfoil is characterized by the increase of the lift coefficient Cl and the drag coefficient Cd well beyond the maximum values obtained for a static airfoil. The stall angel αs is also much higher for pitching airfoils compared to static airfoils (see [2]). Main cause of the increased lift and drag coefficient is the development of a large attached dynamic stall vertex (DSV) developing on the suction side of the airfoil as the angle of attach increases. This vortex is swept towards the trailing edge causing the pressure minima to move towards the trailing edge. This causes a strong nose down moment (see [3]). As the angle of attach decreases the flow becomes attached again with a large hysteresis in the lift. The strong variation of the lift and drag leads to large oscillatory forces and the change in the moment coefficient Cm leads to large torsion of the airfoil. Since this large forces and moment can severely damage the structure, it is a must to have numerical tools which can accurately predict this phenomena.

The next figure shows the setup of the simulation. In the experiment by [2] a Reynolds number based on the chord length c of Re = Uoo c / v = 1.35 x 105 was investigated. Uoo is the velocity upstream and v the kinematic viscosity. Three reduced frequency κ = \frac{ω c }{2 Uoo} = 0.1, 0.05, 0.025 from the experiment are investigated. ω is the pitching frequency. In order to compare the measurements and the simulation, both have to have the same non-dimensional parameters. For the simulation a chord length of c = 1 m and a kinematic viscosity of v = 1.0 x 105 m2/s2. From the specification of these two parameters we get a velocity of Uoo = $ 1.35 m/s. Based on the aforementioned parameters we get following frequencies ω 0.27 0.135 0.0675 rad/s for the three reduced frequencies κ = 0.1, 0.05, 0.025. For the considered case we have a mean inflow angle of α0 = 10° and an amplitude A = 15°. The periodic pitching movement is defined as:

The mean inflow angle can be achieved by either inclining the airfoil or the inflow velocity. In our case we chose to incline the inflow velocity with a mean pitching angle of zero. This results in a velocity vector at the inflow plane of u = (1.33 0 0.23). The airfoils is pitching around an axis located at a quarter chord length from the leading edge at the symmetry axis of the airfoil.

Regarding the inflow condition for the turbulent quantities the suggestion reported in https://www.openfoam.com/documentation/guides/latest/doc/guide-turbulence-ras-k-omega-sst.html and in https://www.openfoam.com/documentation/guides/latest/doc/guide-turbulence-ras-k-omega-sst-lm.html are applied. For the turbulent dissipation rate $\omega$ a reference length scale L = 1 m is chosen. A sensitivity analysis of the latter quantity has shown little influence of the flow on L at the inflow. Together wit an inflow turbulent intensity I = 0.08% of the reference experiment [2] we get following values k = 1.7 x 10-6 m2/s2, ω = 0.0024 1/s, Reθ = 1190. At the wall we chose a nutkWallfunction were the turbulent viscosity at the wall is calculated using a binomial blending between the values obtained applying the laws in the viscose sublayer and the one in the logarithmic wall layer. For details see https://www.openfoam.com/documentation/guides/latest/doc/guide-bcs-wall-turbulence-nutkWallFunction.html. 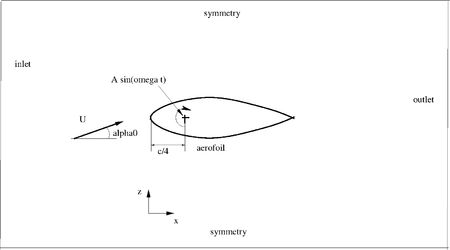 The next figure shows the mesh generated with snappyHexMesh. In order to achieve a mesh, which is capable to rotate with the prescribed pitching motion, a circular region has to be created. This is achieved by specifying the cylinder in the entry geometry in the snappyHexMeshDict. After that, the surface around this cylinder is refined and a surface patch is created at the boundary of the cylinder. Furthermore a cell zone is specified in the inner part of the cylinder. This has to be set in the refinementSurfaces section of the snappyHexMeshDict. The listing below shows the relevant entries in the dictionary. The cell zone is required by the dynamicMeshDict in order to move the cells in this regions.

The final mesh had around 20 000 cells. Note that this mesh is relatively small for a 2D dynamically pitching airfoil in order to keep the simulation time for this tutorial small. Reference simulation in the literature use meshes in the order of 105 cells (see [4,5]).

In order to achieve a periodically pitching mesh we have to prescribe the cell zone which is subject to this prescribed motion. Furthermore the origin of the oscillatory motion, the amplitude and the frequency has to be specified. The dynamicMeshDict for the case of a reduced frequency of $\kappa = 0.1$ is shown below.

Four different simulations are made. For the reduced frequency of κ = 0.1 the k-omega SST model is compared to the γ −Reθ model. The reason is that the latter model is able to predict the laminar-turbulent transition on an airfoil. Part of the boundary layer is laminar for this Re-number (see [2]) and the break down of the laminar separation bubble close to the leading edge of the airfoil was found to initiate the appearance of the dynamic stall vortex (see [1, 3]). For this reason, a model which is able to predict the laminar turbulent transition should also be tested.

The next table compares the lift coefficient Cl , the drag coefficient Cd and the moment coefficient around quarter chord length Cm between simulation and experiment. It’s obvious that both Cl and Cd are underpredicted for the simulation. The reason is that in the simulations the flow is predicted as already stalled (see next figures) and in the experiment it is not. The static stall angel αss in the experiment is around 13◦ . The reason of the difference between the simulation and experiment is not very clear. A cautious guess is that the nose of the airfoil is to coarsely resolved with the current snappy- HexMesh procedure. A coarsely resolved leading edge can be bee also seen as artificial roughness. Roughness on the leading edge can reduce the lift, increase the drag and lead to stall at smaller angles of attach [6].

The next figure shows the contour plot of the velocity magnitude for the k-Omega SST model (left) and the γ Reθ model (right). It is evident that for an angle of attache of α = 10◦ the k-Omega SST model predicts already a fully stalled flow regime. The γ Reθ model predicts a state where the trailing edge separation is moving upstream. This is the stage right before the fully stalled regime.

The next figure shows the development of the drag coefficient Cd over the pitching angle α. What it is evident is that the maximum Cd goes well beyond the static values. The experimental values are reasonably well cap- tured. Here it has to be said the care has to be taken since the static values are quite off (see former chapter) and the agreement with the dynamically pitching experiment can be only be chance. There are some differences be- tween the k-Omega SST model and the γ Reθ for a κ = 0.1. For the k-Omega SST model we observe a sharp drag increase right before the airfoil starts the pitch down again. For the γ Reθ the drag increase is more gentle. The reason is not clear. Regarding the dependency with the reduced frequency κ we have a reduction of the drag with this quantity. For the smallest value considered κ = 0.025 in the experiment we observe a drag reduction before the airfoil pitches down. The simulation report a drag increase until the maximum angle of attach α. 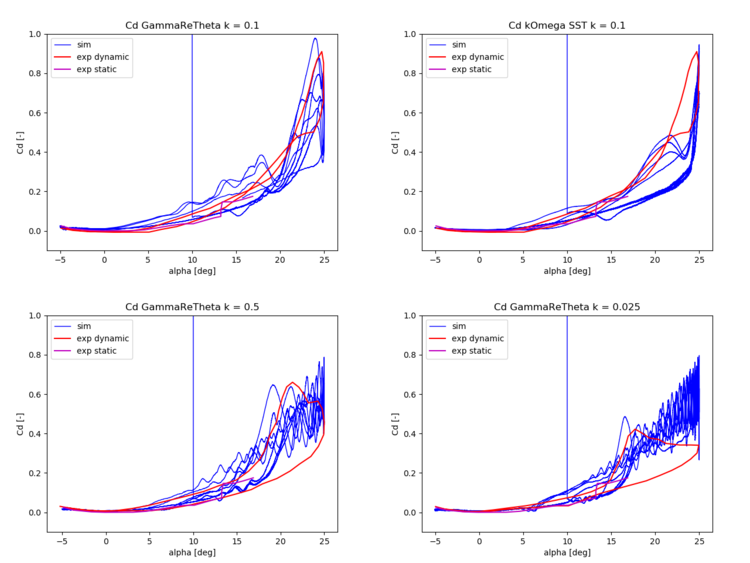 The next figure shows the development of the lift coefficient Cl over the pitching angle α. What it is evident is that the maximum Cl goes well beyond the static values. The experimental values are reasonably well cap- tured. Here it has to be said the care has to be taken since the static values are quite off (see former chapter) and the agreement with the dynamically pitching experiment can be only be chance. There are some differences between the k-Omega SST model and the γ Reθ for a κ = 0.1. For the k-Omega SST model we observe a constant increase of the list until right before the airfoil starts the pitch down again. For the γ Reθ the lift increase is more rapidly for higher angles of attach. The reason is not clear. Regard- ing the dependency with the reduced frequency κ we have a reduction of the lift with this quantity. For the smallest value considered κ = 0.025 in the experiment we observe a lift before the airfoil pitches down. The simulation report a lift increase until the maximum angle of attach α. The reason is not known. 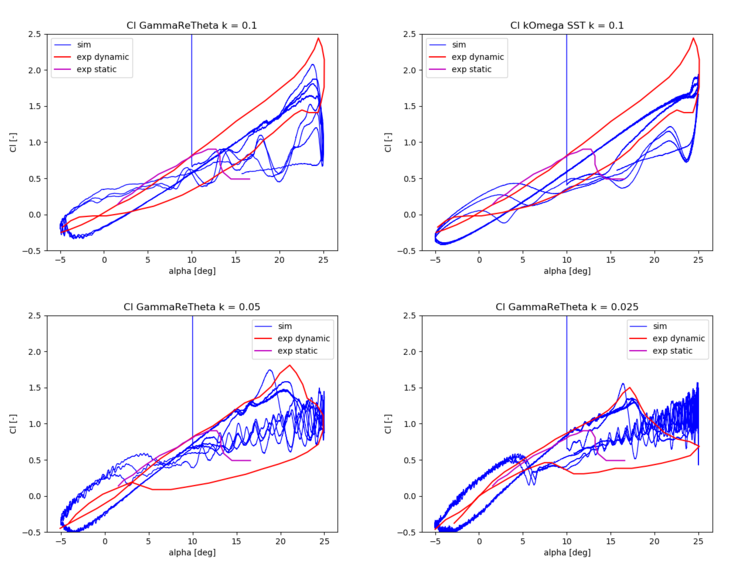 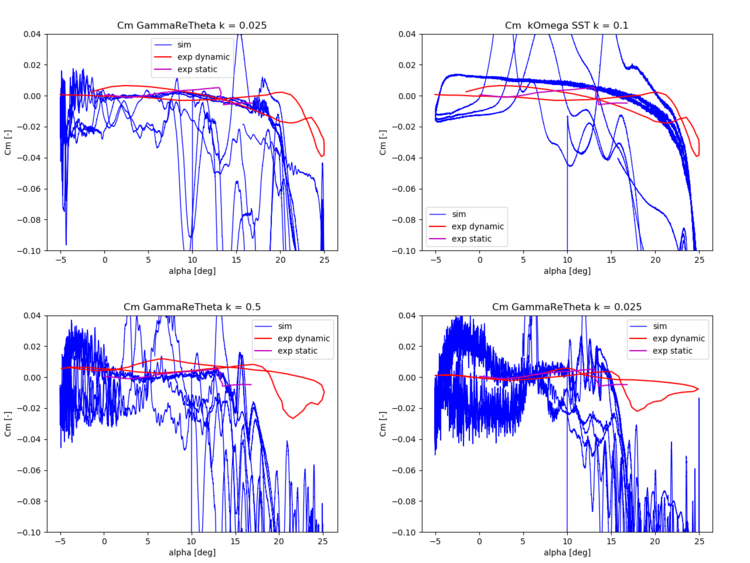 The figure shown below, represents the evolution of the velocity mag- nitude over a pitching cycle. It can be seen that the flow changes from attached to fully stalled. The region of low velocity above the airfoil in the stalled stages is very large. 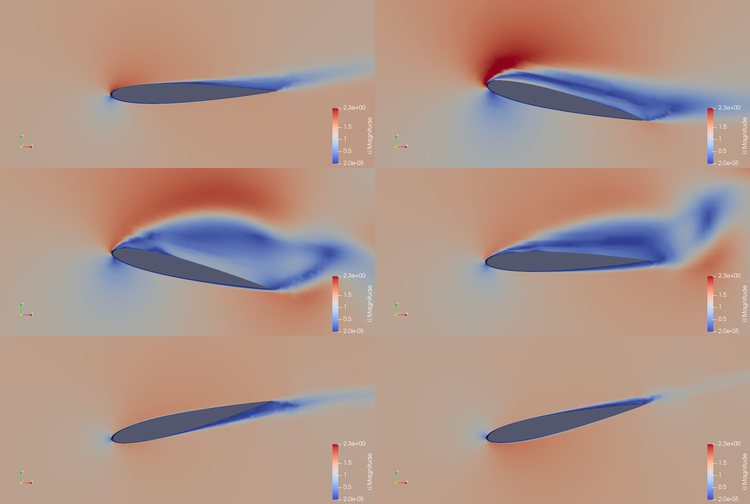