Sphere settling under the influence of gravity with varying contact angle

In this tutorial the capabilities of the overset methodology of OpenFOAM are further explored. In the previous tutorial a sphere settling under the influence of gravity was simulated (see this tutorial for more information.

It was shown, that the temporal evolution of the displacement and the velocity of a sphere settling in a viscous fluid is well captured. This means that the viscous and pressure forces integrated over the sphere surface are well captured. Furthermore it also means that the interpolation errors introduced by the overset methodology are not too big.

In order to systematically explore the capabilities of the overset methodology, the degree of complexity is only slightly increased compared to the previous tutorial: In this tutorial the impact of a solid sphere on a liquid surface is simulated. With reference to the previous tutorial the Reynolds number is increased from 1.5 to approximately 5000. Even though the Re-number is increased quite a lot, the boundary layer still remains laminar (see [1] for experiments around a sphere). This means that no turbulence model has to be used. For this reason, the main difference to the previous tutorial is the impact of the solid sphere at a gas-liquid interface. Regarding this event, quite recently an interesting phenomena was observed experimentally (see [3]) and also simulated (see [2]): When a sphere with a hydrophobic coating impacts on a gas-liquid interface, a big air cavity is formed behind the sphere. In case of a hydrophilic coating, the liquid is able to enclose the sphere completely while impacting on the interface and no air cavity is formed behind the sphere. When the event is recorded by a microphone, a big splash is heard for the first case and only a blob for the second [3]. 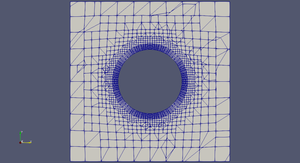 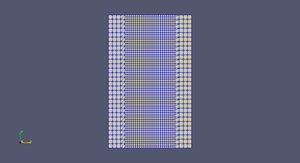 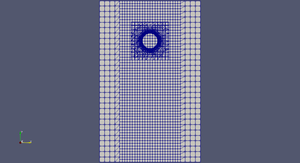 In this section briefly the simulation set up is explained. Since most parts are very similar to the tutorial described here, only the differences are highlighted. This are mainly the mesh and the used solver (overInterDyMFoam) with its required fields and boundary conditions.

Although already explained in the tutorial here the steps to generate a mesh for the overset methodology in OpenFOAM is briefly explained. The steps are always the same and very simple: First the meshes around the moving bodies are generated. In our case it is only one around the sphere (first figure to the right). After that the background mesh is built (second figure to the right). The final step is the merging of the meshes around the moving bodies and the background mesh into one single mesh. The merged mesh is shown in the third figure to the right. Note that the mesh around the sphere has to be very fine in order to resolve the dynamics of the contact line between the liquid and the gas. In this case the height of the first cell was chosen to be 2.5e-5m. 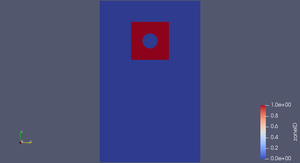 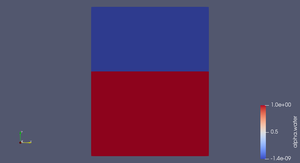 In order that the interpolation between meshes works correctly, it is important that the outer boundary of each moving mesh has to be declared as type overset. Furthermore a scalar field named zoneID has to be created. Each region in the domain has to have its own id. In our case there are only two regions: the moving mesh around the sphere with id 1 and the background mesh with id 0 (see figure on the right side). The order of the numbers does not matter. The important thing is that they start with 0. On the right hand side in the figure the initialization of the indicator field alpha (1 for water 0 for air) is shown. Both fields can be initialized with the setFields utility.

In order to match the experiments by [3] and the simulations by [2] the velocity of the sphere is initialized with 5 m/s. The motion of the sphere is calculated with the sixDoFRigidBodyMotion solver. For a velocity of 5 m/s and a water-air interface, [3] and [2] reported a completely different behaviour of the air cavity behind the sphere impacting the interface: For a hydrophobic coatings a big air cavity is formed while for hydrophilic coating almost no cavity is formed. To simulate this two different scenarios, two simulations with different static contact angles θ0 are performed: θ0 = 30° and θ0 = 150°. The lower contact angle is the hydrophobic case and the higher contact angle the hydrophilic case. Here the same definition as used in OpenFOAM is taken: The contact angle is defined inside the liquid going from the solid surface towards the liquid-gas interface. The application of a static contact angle seems to be a very crude assumption. The reason is that close to a moving contact line different physical effects play a role depending on the distance to triple contact point between the solid, the liquid and the gas (see the review of [4]). Since the scope of the tutorial is to show the qualitative difference between a hydrophobic and a hydrophilic coating, the crude assumption is appropriate.

Figures in the bottom show four snapshots for different times after the release of the sphere. The left column represents the hydrophilic case and the right column the hydrophobic case. It is evident that the air cavity shows a completely different behaviour for the two cases analyzed. For the hydrophilic case almost no air cavity is observed after the entrance of the sphere into the water. For the hydrophobic case a big cavity is formed. This observations are in qualitative agreement with the [3] and the simulations by [2].

What has to be mentioned, is that for both cases after some distance from the water-air interface the mesh around the sphere starts to turn and the trajectory of the sphere deviates from a straight line. The reasons are still unknown. An educated guess is that an asymmetry of the interpolation errors introduced by the overset methodology leads to this asymmetric behaviour of the sphere trajectory. 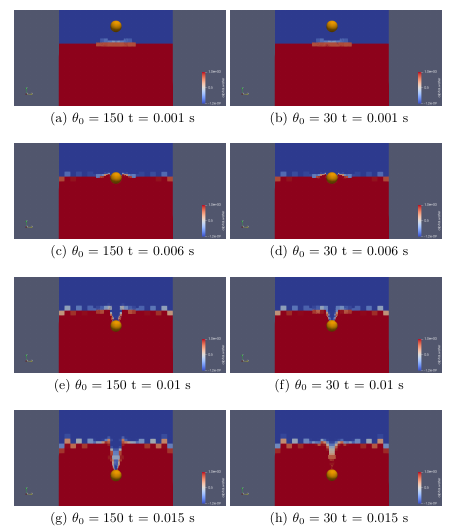 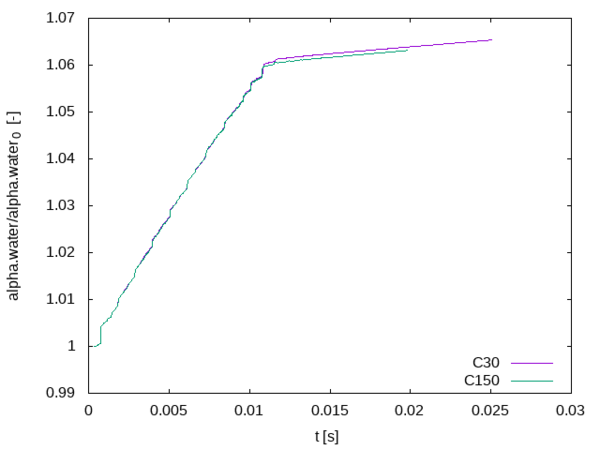 [2] Minh Do-Quang and Gustav Amberg. The splash of a solid sphere impacting on a liquid surface: numerical simulation of the influence of wetting. Physics of Fluids, 21(2):022102, 2009.