Vortex induced vibration of a 2D cylinder by Michael Alletto

In this tutorial we will examine the capability of OpenFOAM to simulate the vortex induced vibration on a circular cylinder in a 2D laminar configuration. The cylinder is free to vibrate in stream wise and in transverse direction. This kind of flow configuration is often used to validate codes which aim to describe the interaction of a fluid with a solid structure (see e.g. [3],[6]).

Besides that, this configuration is used to answer fundamental questions of the basic physical mechanisms playing a role in the interaction between the flow and the solid body (see e.g. the review of [8]). Recent studies concentrate on the phenomena which lead to large amplitude oscillation of the cylinder and the synchronization of the vortex shedding frequency with the natural frequency of the spring-mass-damper system (see [1],[5]).

This tutorial is the final tutorial of a series of three which aims to illustrate how to validate a complex simulation task: It is convenient to break the problem first down into smaller easier sub tasks. In our example series before simulating the final problem of the vortex induced oscillations of a circular cylinder, we first simulated a fixed cylinder (see [1]), than a moving cylinder with a prescribed motion (see [2]), after that we checked the performance of the six degree of freedom body solver against an analytical solution (see [3]) and only as last point we tackled the simulation of the cylinder mounted elastically in a moving fluid. With this kind of procedure it is much easier to isolate eventual errors of the settings or maybe also bugs in the underlying code.

The next figure shows the setup of the simulation: At the inflow a uniform velocity of Uoo = 0.0656 m/s in x-direction is applied. The pressure is set to zero gradient at this boundary. At the top and bottom walls a slip boundary condition is applied. At the outlet the pressure is to be set equal to zero and for the velocity a zero gradient boundary condition is applied. The kinematic viscosity v = 1.05 x 10-6 m2/s is set in order that the Reynolds number Re = Uoo D / v based on the cylinder diameter D = 0.0016 m is equal to Re = 100. For this Reynolds number the flow over a stationary cylinder is two dimensional. For this reason the flow is assumed to be two dimensional. This is imposed by using only one cell in span wise direction and setting both boundary conditions in this direction to the type empty. At the cylinder wall a no slip boundary condition is applied for the velocity and zero gradient for the pressure. The cylinder is free to oscillate in x- and y-direction. In this direction a linear spring restrain type is applied. The linear damping is set to zero in order to be comparable with the reference simulation of [7]. The domain extends 20 D in upstream direction, 40 D in downstream direction and 20 D in both lateral direction. For this size of the computational domain [4] found that the results are almost independent of the location of the boundaries. 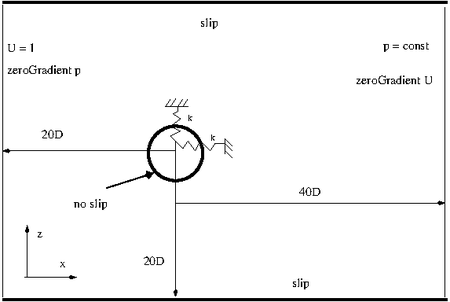 Four different non dimensional velocities are computed: U* = Uoo/(fn D) = 4, 4.8, 5 and 8.5. Uoo is the incoming flow velocity and fn = ω/(2 π) = (k / m)0.5/(2 π) is the natural frequency of the spring-mass system. The lowest and highest non-dimensional velocity correspond to cases in [7] where the shedding frequency is not synchronized with the spring-mass system and therefore low amplitude oscillation of the mass occur. A U* = 4.8 correspond to the onset of synchronization with large amplitude oscillation (z/D approximately 0.6) in the reference experiment. A U* = 5.5 correspond to a region in the middle of the synchronization regime. Also for this case the reference experiment reportes large amplitude oscillations. Having defined the diameter D of the cylinder, the incoming flow velocity Uoo and the mass m = 0.03575 kg, after that, one can determine the four different linear spring constants k = 148.2, 102.97, 78.42 and 32.83 N/m to obtain a non-dimensional velocity of U* = 4, 4.8, 5.5 and 8.5, respectively. The last non-dimensional parameter to match is the non-dimensional mass m* = m / mf = 4 m / (π ρ D2 H) = 10. H = 0.12 m is the height of the cylinder. In order to match this non-dimensional parameter the density is set to 14817 kg / m3.

The next listing shows the dynamicMeshDict for the overset mesh. For the morphing mesh it is almost the same. The only thing which changes is the entry for dynamicFvMesh. The basic difference to the tutorial described in [5] is that the motion is constrained in the y-plane instead of along the z-axis.

Note the we chose the symplectic solver for the solution of the displacement of the solid body. The reason is that we found out in the tutorial [6] that the Newmark (and also the Crank Nicolson which is equal to the Newmark method for the default parameters) is unstable if the spring forces are treated explicitly. This underlines the necessity to validate each sub component of a complex simulation method separately before tackling the combined problem to reduce erroneous settings to a minimum.

The results obtained for the St number St = f D / U, the r.m.s drag coefficient Cd,rms, the r.m.s lift coefficient Cl,rms, the r.m.s of the x-displacement xrms and the maximum z-displacement zmax are shown in the next figure. The shedding frequency f is calculated using the time signal of the lift force. The results are compared with the simulations of [7]. From this integral coefficients it is evident that no big differences are visible between the coarse and fine overset mesh and the coarse and fine morphing mesh. For this reason all further computation are made with the coarse version of both meshes in order to save computational resources. The morphing mesh simulations agree well with the reference simulation except for the root mean square displacement in x-direction xrms. The reason for this discrepancies are not very clear. Note that the python scripts used to calculate this quantities are included in the tutorial material.

The next table compares the St number, the r.m.s drag coefficient Cd,rms, the r.m.s lift coefficient Cl,rms, the r.m.s of the x-displacement xrms and the maximum z-displacement zmax for different U* with the simulations of [7]. It is evident that the best agreement with the reference simulation is obtained for the morphing mesh. For U* = 4.8 were [7] obtained already a locked in state, the overset mesh simulation reports only small oscillation and the morphing mesh simulation seems to be in a transitional regime right before the onset of lock in (see the figures displaying the evolution of the z-displacement). For the highest non-dimensional velocity U* = 8.5 the overset mesh predicts higher oscillations compared with [7] and the morphing mesh. It has be be said that this U* lays very close to the end of the lock in region reported in [7]. It seems that the boarders of the lock in region obtainable with the overset mesh with the settings used in this tutorial are shifted towards higher U* compared with the morphing mesh and the reference simulation. 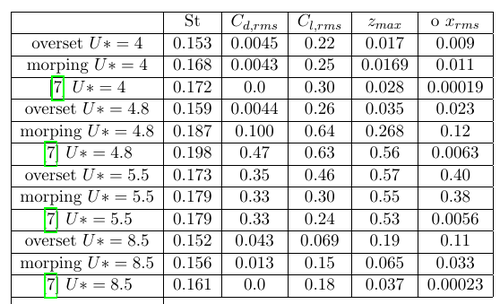 The next figure compares the work done from the start of the simulation (t = 0) until the time t by the fluid on the cylinder for the two mesh types and the four non-dimensional velocities analyzed. It is calculate (see also [7]):

Fz is the force in z-direction excreted by the fluid on the cylinder and vz is the z-velocity. According to [1],[2] the main mechanisms which leads to large amplitude oscillation is a positive energy transfer (or work done) over a oscillation cycle from the fluid to the oscillator. In order to check if this mechanisms can be found also in the present tutorial, we have plotted the following figure. It is evident that for the cases with large oscillations in z-direction the work done experiences a sharp increase and after that it remains constant. The large work done by the fluid is necessary to increase the amplitude of the displacement. After that a mean steady state is reached the work done of the fluid over an oscillation cycle has to be zero for the present simulations without structural damping [1]. For this reason the total work done by the fluid on the oscillator convergence to a constant value.

The next figure shows a snapshot of z-vorticity for the overset (left) and morphing (right) mesh for an U* = 4 (top), U* = 5.5 (middle) and U* = 8.5 (bottom). For the first two non-dimensional velocities the shedding modes are different. For the lower non-dimensional velocity (U* = 4) the shedding mode is similar to a stationary cylinder: Two single vortecies are shed per cycle from the cylinder. This shedding mode is called 2P mode which is also observed by [4],[7] in the low amplitude case. For the high amplitude oscillations case this two vortecies merge giving rise to the C(2P) mode also observed by [4],[7]. The flow pictures obtained with the overset mesh and the morphing mesh are very similar for this two U*. For an U* = 8.5 were the fluid flow is outside the lock in regime the flow picture is again similar to a stationary cylinder resulting in a 2P mode. The same is observed also in [4],[7]. 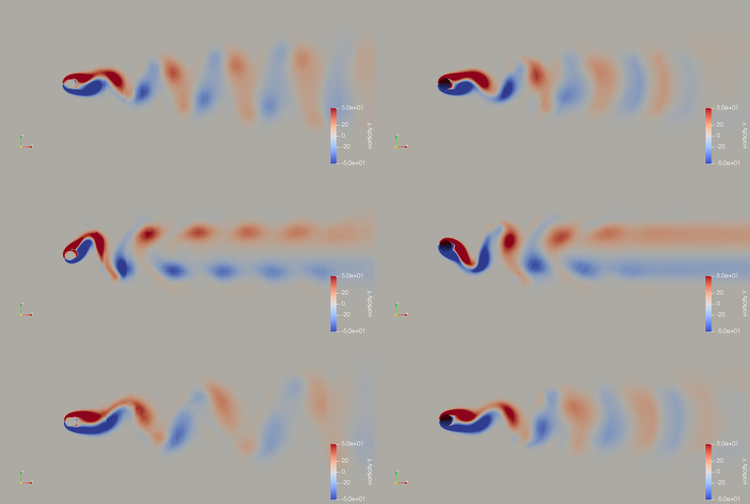